i was feeling defeated. i mean, there were plenty of options everywhere to visit with santa. it wasn’t like this was the only choice but i was a stickler for wanting to go there because it’s been the only place we’ve ever gone to for a visit with the guy in red.

sooooo, one day, i stopped by and they had open slots for visits {they apparently said the weekend before christmas would be open to walk in’s}, i put in our name and was super excited! olive had written a letter to santa weeks prior and it was urgent to get it in his hands!

the girls got dressed up and we had plans to hit up dinner at roka akor afterwards. we arrived at the santa station and it was a bit crowded. we checked in and there was a lot of commotion going on inside. people were irritated and annoyed with their wait times and reservations. right after i checked in, a girl came up to me and asked, “how did you make a reservation?”, i was like, uhhhhhh…i stopped in earlier in the day. there was a particular women there who was mouthy, rude, and obnoxious. she constantly got into the host’s face and had such attitude and was so angry at her because they had been waiting a bit to see santa. what a prime example of patience and kindness she was showing her kids! LOL there was such a negative vibe going on, it was almost unbearable!

i must admit, the wait time was way too long and i assume they overbooked people, causing all of us to wait longer than expected. our reservation was at 6 and we didn’t see santa until 50 minutes later!!!! there was no turning back…we needed to see the big guy but our restaurant reservations were at 6:45!

well, of course we didn’t rush our visit with santa. we walked inside the airstream and santa was just chilling. ellie freaked out and olive was so excited! immediately olive went over to sit with him. she spent a few minutes with him while ellie hid behind hc. when it was time for some pics, i literally had to peel ellie off of hc like she had the claws of life on him. it was funny. for us, apparently not for her. she resisted but i reassured her he was super nice. santa read to them and was super kind and patient. ellie was doing just fine, although still quite skeptical.

overall, i was so proud of both babes for being so good! i always say 3 is the magic number. olive was open but not keen on santa at that age and then the following year, she was a super fan! i am expecting the same with ellie…next year will be even better!

we literally ran to the restaurant after the santa visit! i had called to let them know we were going to be late and they were so gracious with letting us get there 25 minutes later than expected! the restaurant was so good and we had a wonderful experience.

our visit with santa ended being fantastic despite the horrible wait time and environment and our dinner as a family was just as fun and delicious! i would have to say it was a win win evening!

[ellie not impressed but olive enjoying reading time with santa] 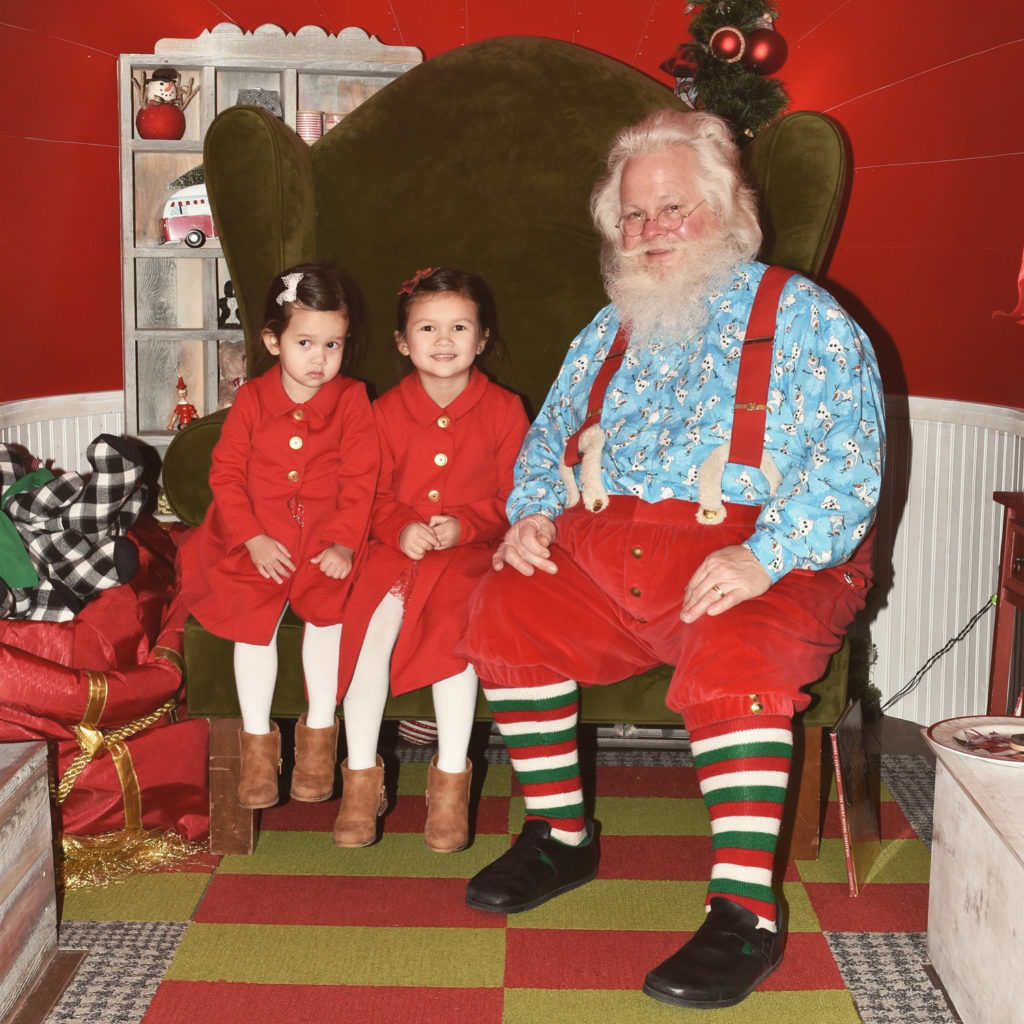 [classic looks from my girls]

• M U S I C • celebrating our friends tonigh