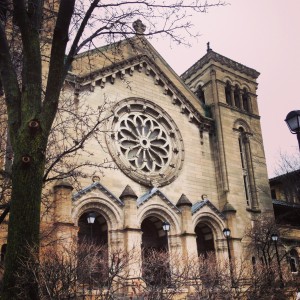 it was a rainy day.  lots o’ rain in the forecast {humph, there goes the curls + twirls i put in my hair!}.  i had dedicated myself for some volunteer work in the morning.  the original plan was to attend the 11:15 mass and participate in the volunteer work right after.  weeeelllllll, that didn’t go accordingly!  i was all gung ho about springing my multitude of clocks forward {which i did}; my alarm went off this morning and the next thing i knew…i overslept!  yikes!  i rushed to get ready, knowing i would make it in time for the volunteer work but disappointed that i would be missing mass!

here’s the good news {a delightful surprise!}, hubby charming told me last night that he was able to come home for the night {yay!}.  so, on my way to st. clement, i called him and we agreed to go to 7pm mass together {soooo what i would prefer better!}.

I got to st. clement in time and helped maggie set up the sign up table {it stopped raining!} for our upcoming service day.  i meeted and greeted with the parishioners after mass to encourage them to sign up for service day.  after all that, i helped maggie break everything down and store it away for the 7pm mass.  it was also great to spend the time together and get to know her better!  also, knowing that i would be attending that mass instead, i told maggie i would participate in the service day sign up again!

it was so nice to be able to attend mass with my hubby charming.  i just love st. clement.  it was a very moving service tonight {very enjoyable and relaxing} and it’s been awhile since we’ve been to a mass where fr. ken was the presider!  the volunteer time after mass was a lot of fun too!  i passed out a good amount of flyers &  got some peeps signed up, but i know quite a few folks in this mass because of the volunteer work we did for theology on tap {so fun!} last summer…it’s dominated by 7pm parishioners.  it was a swell time then and tonight.

yup, it sure was a great day.

give, and it will be given to you. good measure, pressed down, shaken together, running over, will be put into your lap. for with the measure you use it will be measured back to you.  luke 6:38