my birthday started out with me and olive. we were having a great morning! she was snuggly and in a great mood. i got ready and we spent a little us time, snuggling, that morning and then i decided we would hit target.

of course our shopping ‘short’ stop turned into a longer escapade than i had in mind {i should know better, it’s target!}! i was a bit behind on her breakfast and nap. we rushed home and i threw the groceries on the floor and went to work on her breakfast. i fed her, then nursed her, and then off to bed she went! she put up a fight. almost one hour later, she finally fell asleep!

hc’s parents came over around three o’clock, right when olive was finishing up her lunch. i had let her eat her pudding by herself, which is always a hot mess, and i typically throw her in the tub afterwards to clean her up. she gets her food all over the place. she will get pudding on her face {natch}, her hair, her ears, her pj’s, her hands, elbows, you name it…food is on it!

while his parents were over, i made some christmas popcorn {more on that later!} and hc {who came home early} hung out with his dad, while gramma entertained miss olive. once i was done, i got myself all gussied up and was ready to open up my birthday presents! 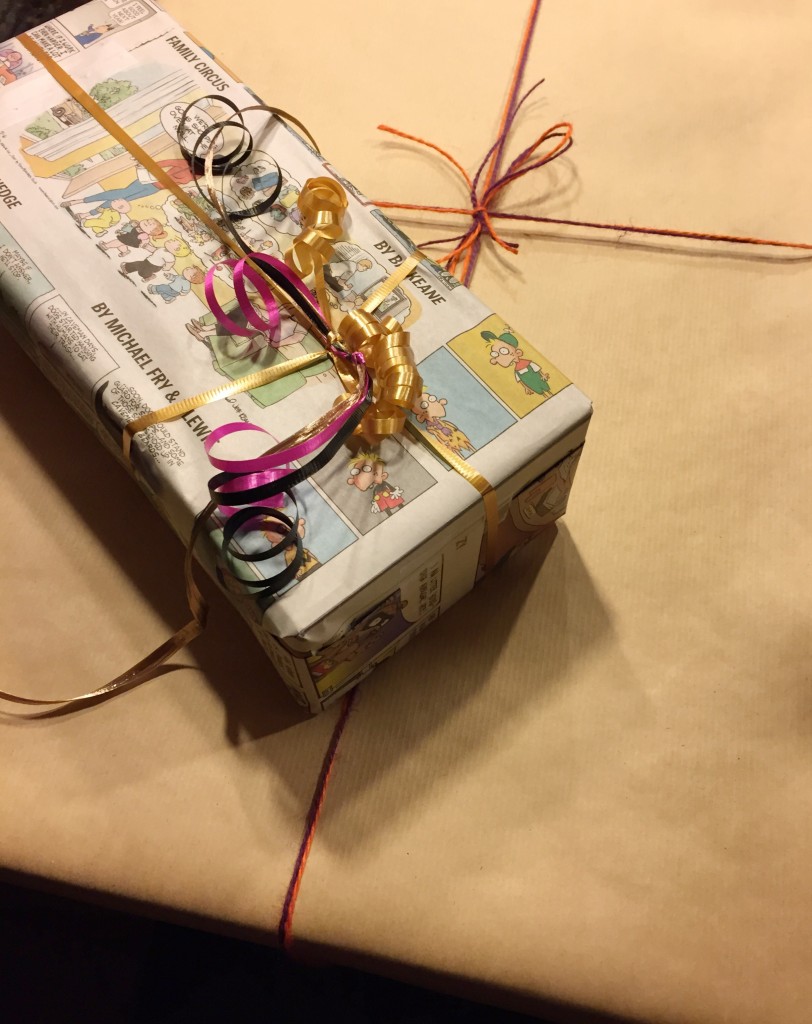 i opened up dick and jane’s gift first. oh my goodness! i was not expecting to find what was inside. actually, i really had no clue what it was but i was extremely surprised! they bought me a pair of tory burch shoes! i was excited! i have a pair {and i looooooove them} but they are old and ragged. the shoes have been through more than what i should have put them through. yay! 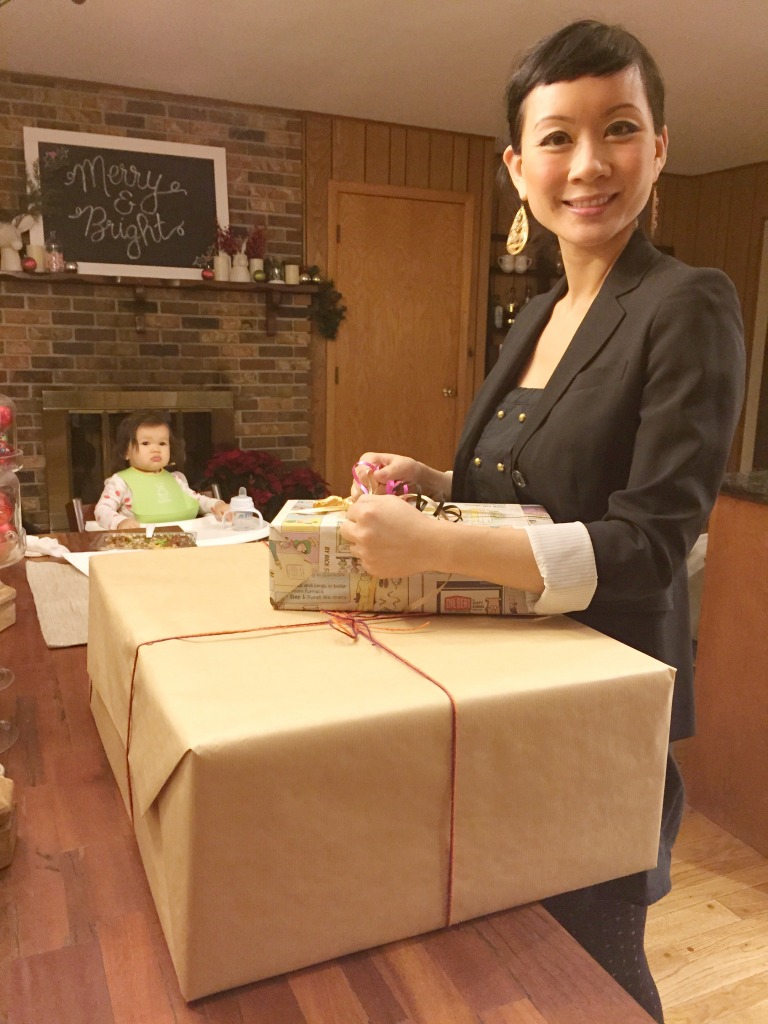 [opening gifts before we head out to dinner] 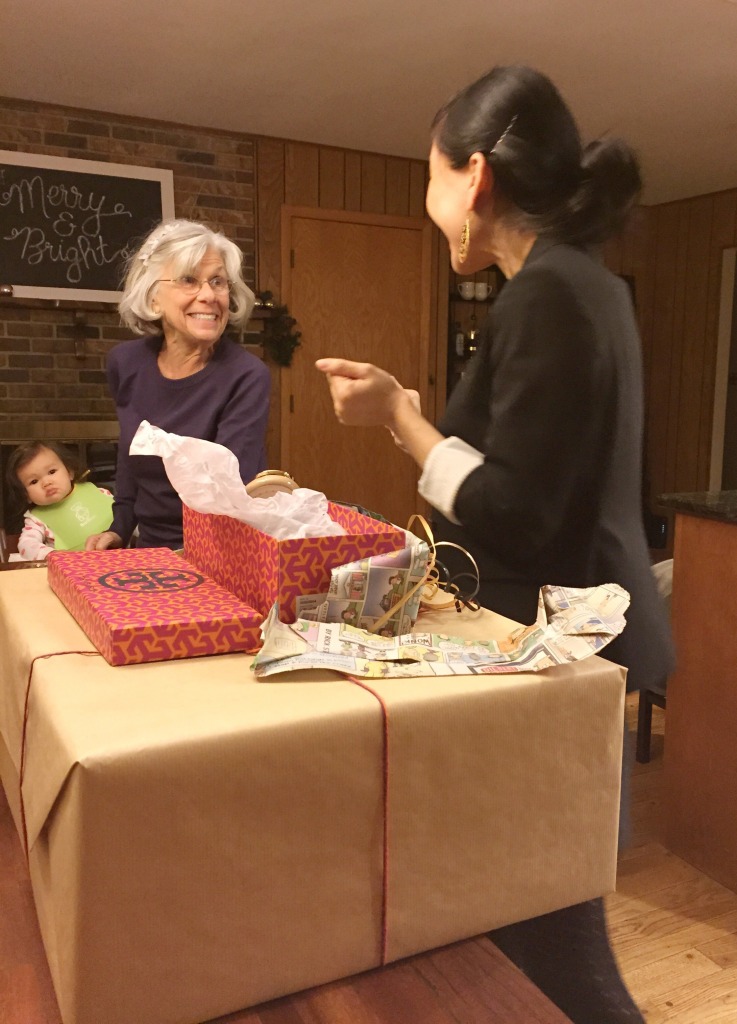 [i was sooooo excited to receive these shoes!!!! it was so unexpected!]

i was ready for hc’s gift. it was quite a big box. as i unwrapped it, i couldn’t get the box open {as you can see, i’m super amused}. my struggles were well paid off!!! my birthday present was from burberry! i was soooooo excited and happy! i had mentioned to hc that i wanted a new coat, my old burberry was dunzo, but i wasn’t sure when i was going to get it. i hoped for it as a possible birthday/christmas gift or something we could buy next year when all the cray spending would settle down. nope. it was here, on my birthday. woot. woot. a beautiful, new, sleek long puffer coat in the color olive. how perfect. 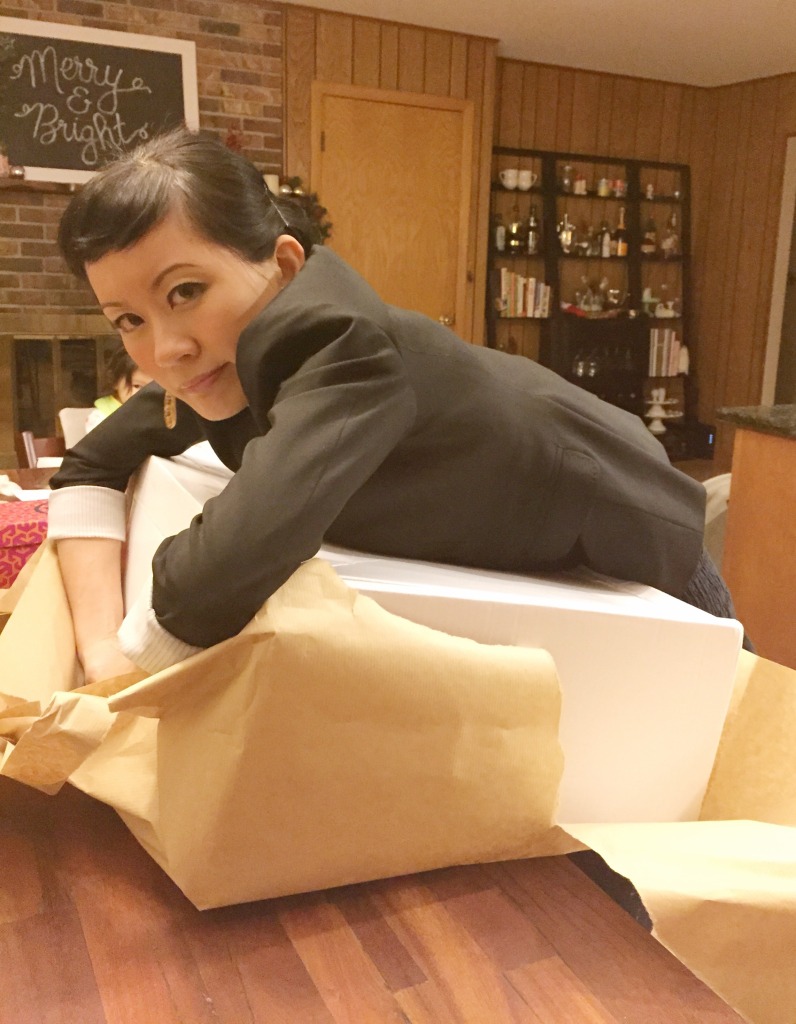 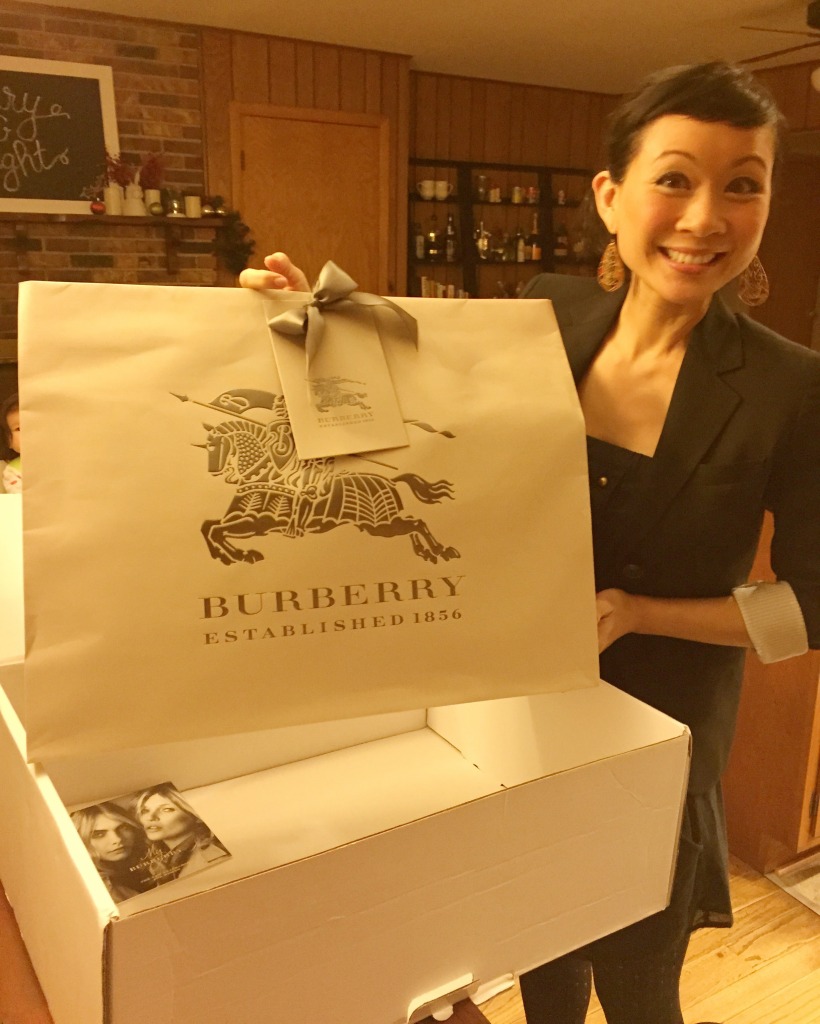 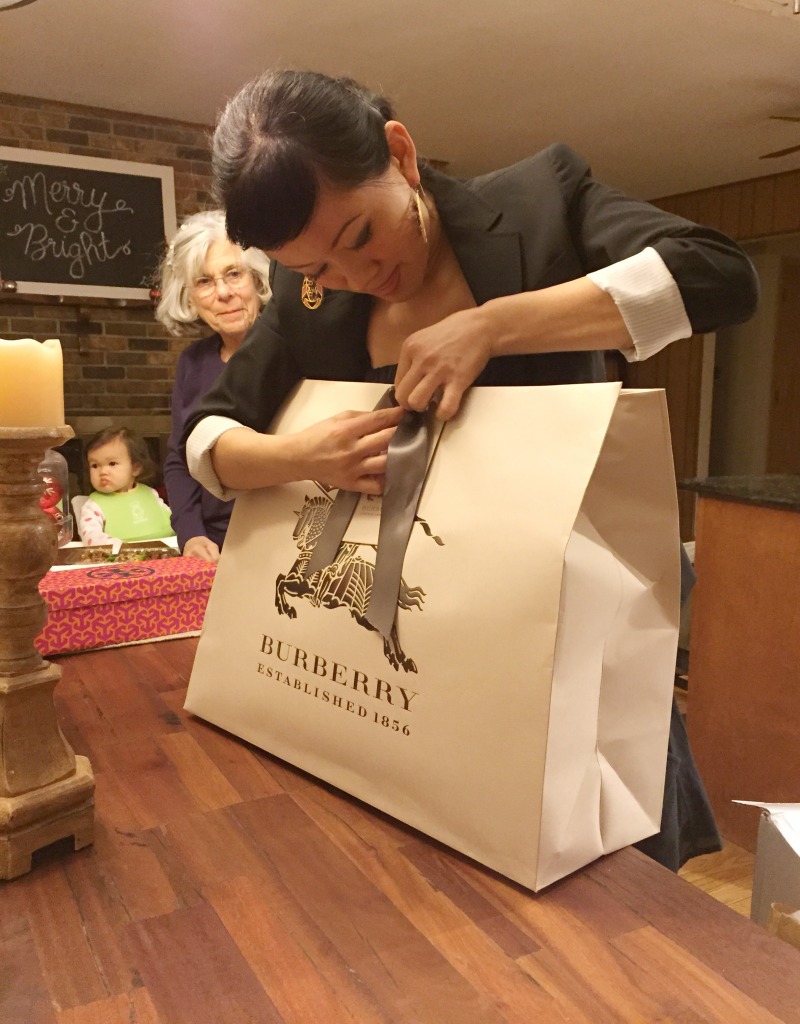 [in love! the color is called olive!] 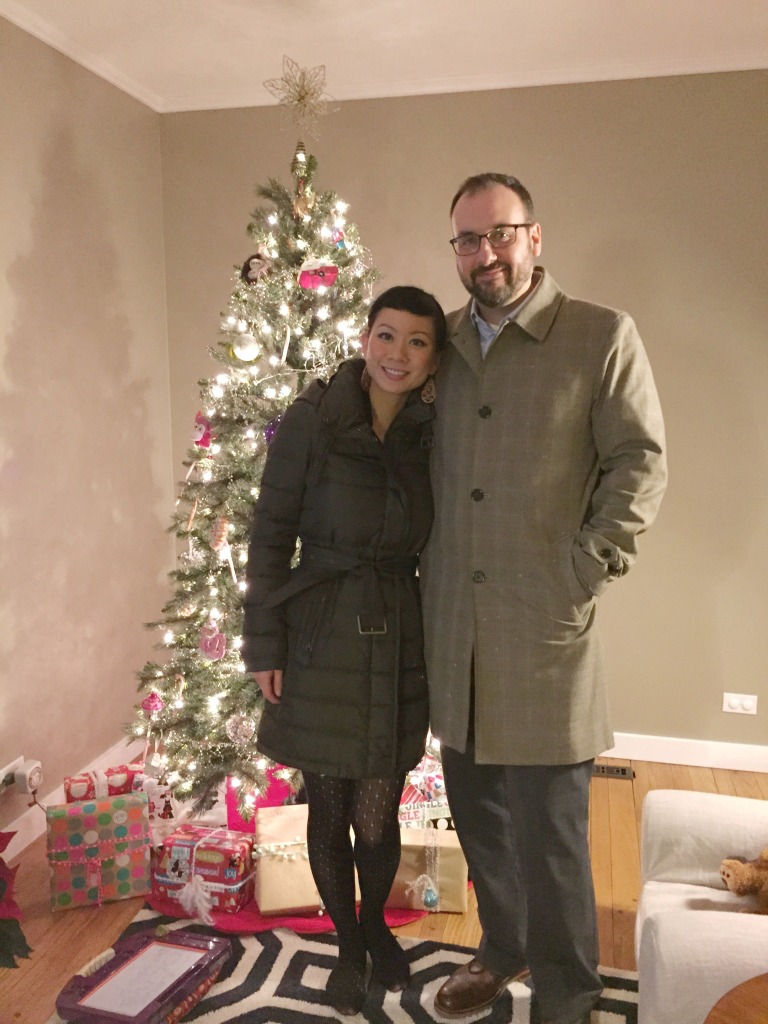 [about to head out for our dinner reservations]

after much hoopla, we rushed out of the house and headed to the city for our dinner reservations. i was super excited to have dinner at our favorite sushi restaurant. hc and i had our third date there. plus, when we lived in the city, it was so easy to go to coast as it was a hop skip and a jump away from our place.

as we were driving there, we passed a new donut shop called stan’s. i loved the store front and how inviting it looked but we were surprised a donut shop opened up there, right across the street from another favorite of ours, glazed and infused. that kind of sucked for them! donut competition!

[we were amused that this donut shop popped up right across the street from glazed and infused, i’m sure they weren’t amused…wow, competition}

we arrived at coast {we scored an awesome parking spot} and were seated immediately. oh, it was delightful. just like old times. we were seated in a cozy corner and had the best time drinking wine, eating apps, and conversing. dinner was fantastic, as usual. i crave sushi and i die over their fried tofu soup. it’s amaze.

well, we ate waaaayyy too much. hc had planned for us to go to hot chocolate for dessert. it’s our usual routine. eat at coast and have dessert at hot chocolate. but we were so stuffed that we passed on it, knowing we had cupcakes waiting for us at home. we wrapped up and headed out. it was great to not rush, to enjoy each other’s company, and savor a delicious meal together. 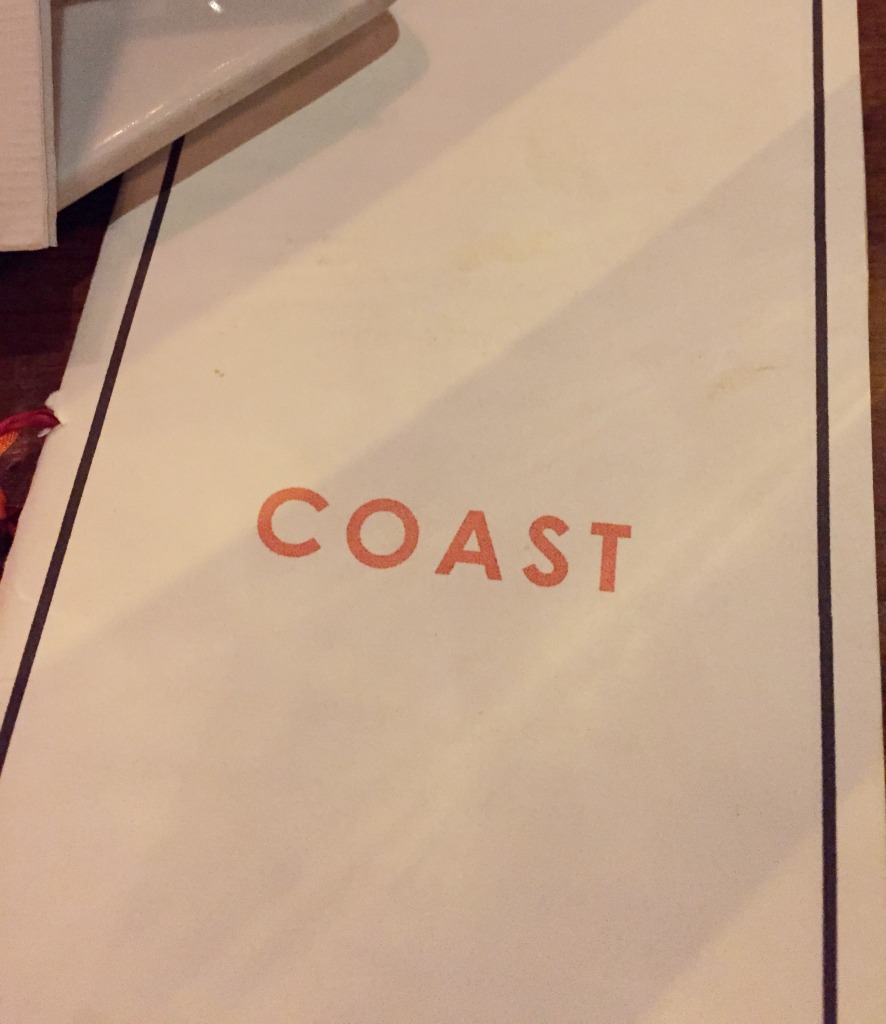 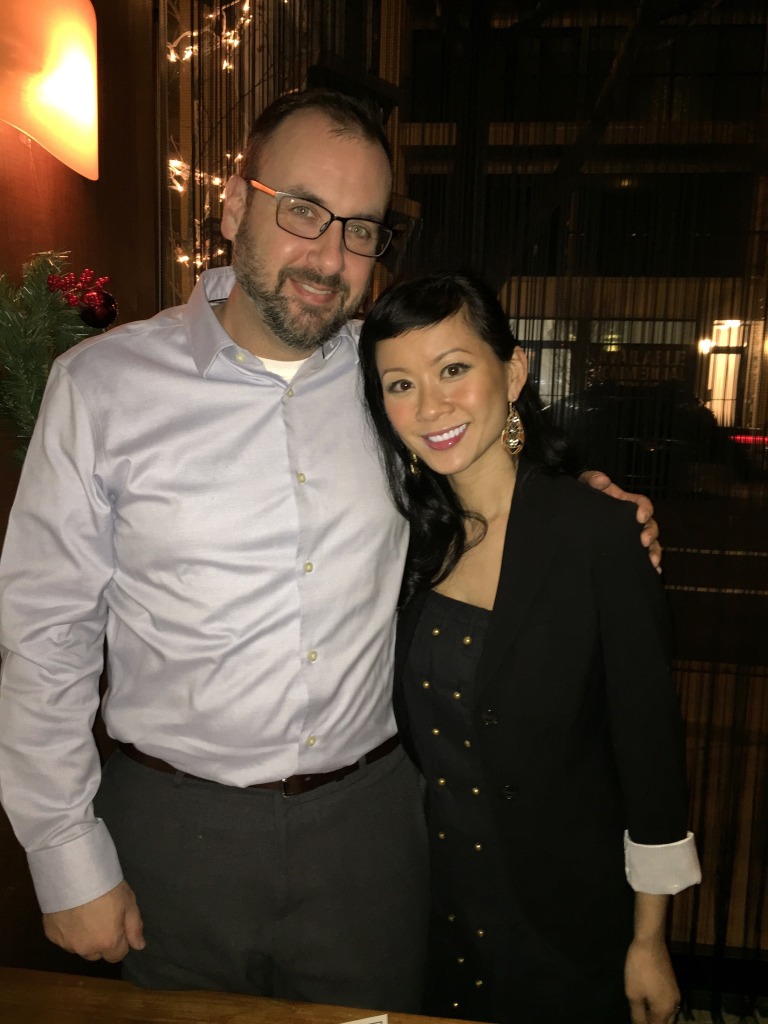 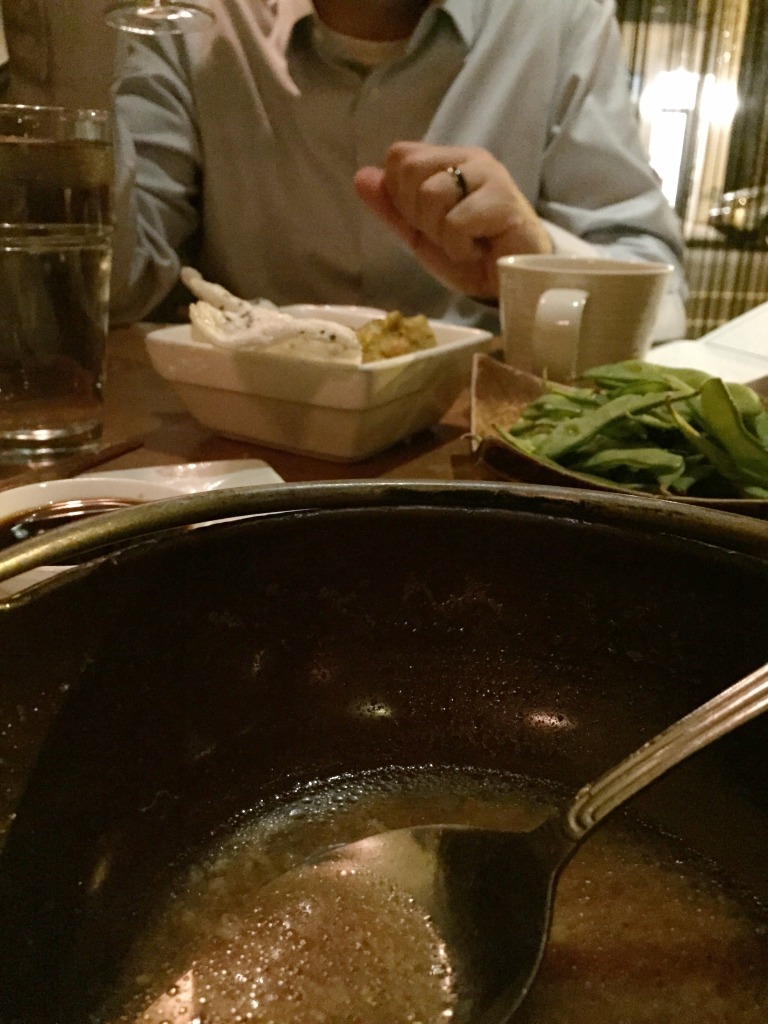 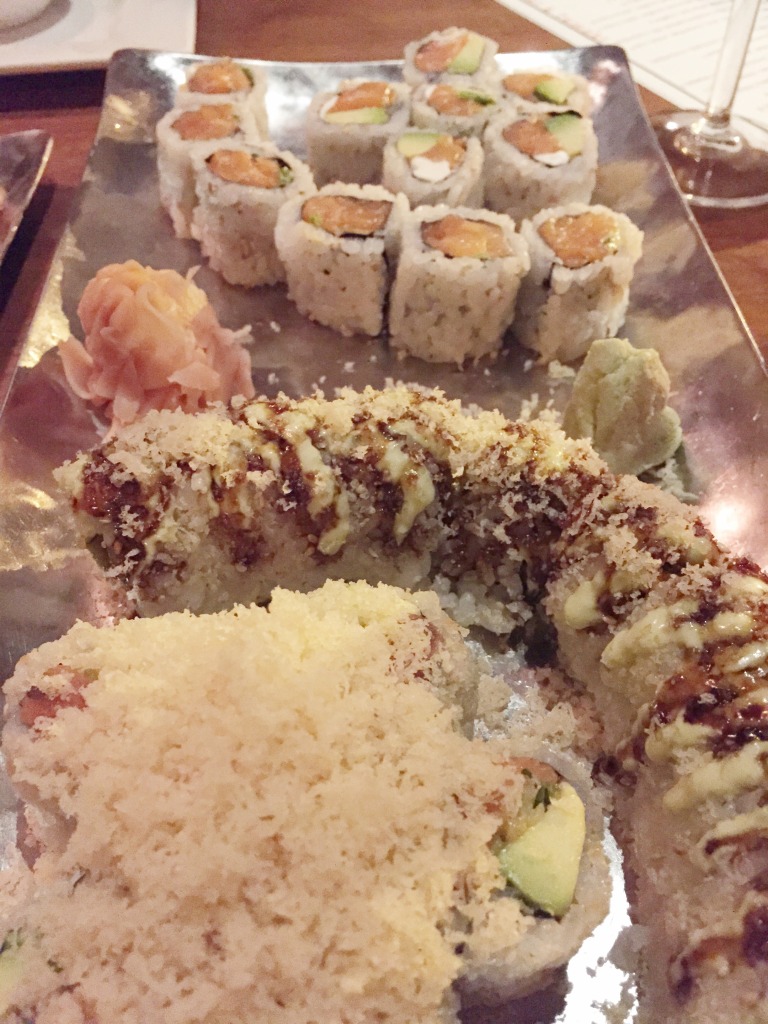 once we got home, we lit my birthday candle, they sang happy birthday, and it was a wrap! it was quite a successful birthday! 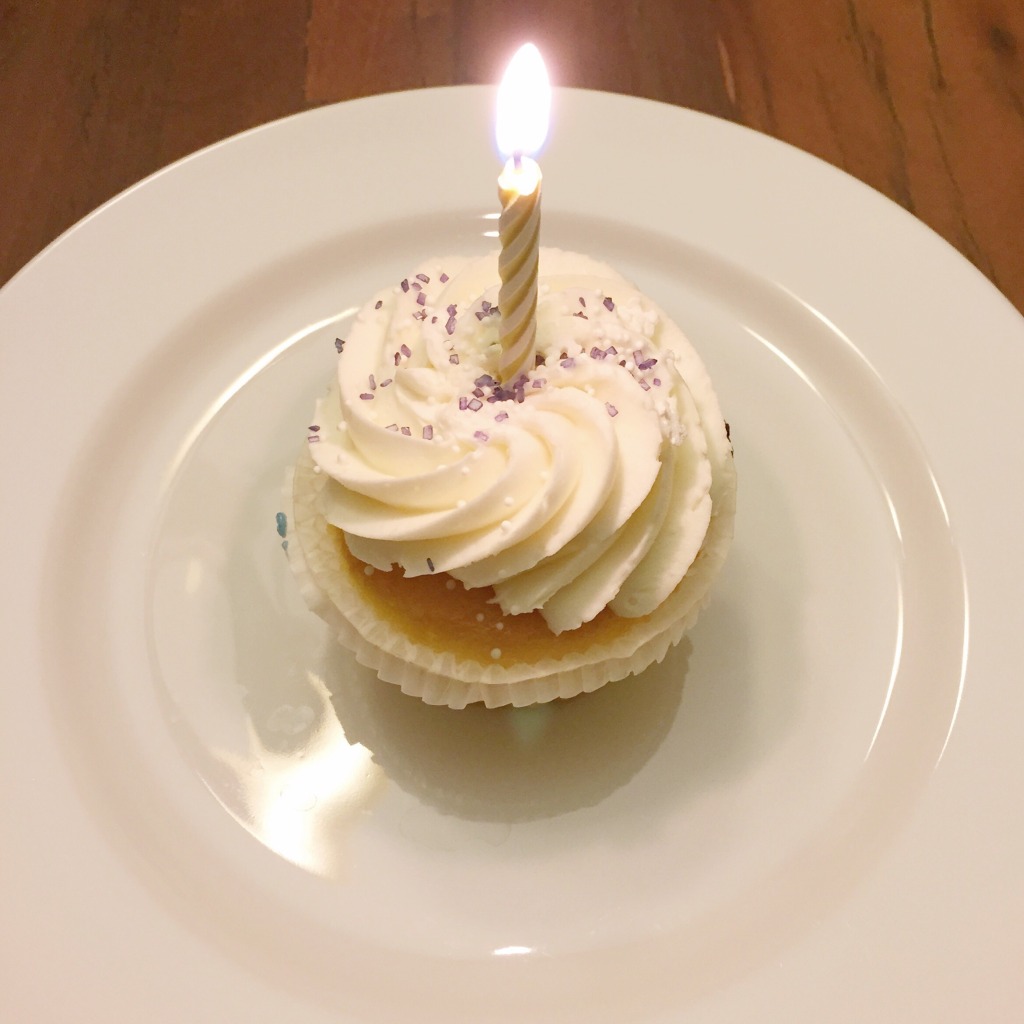 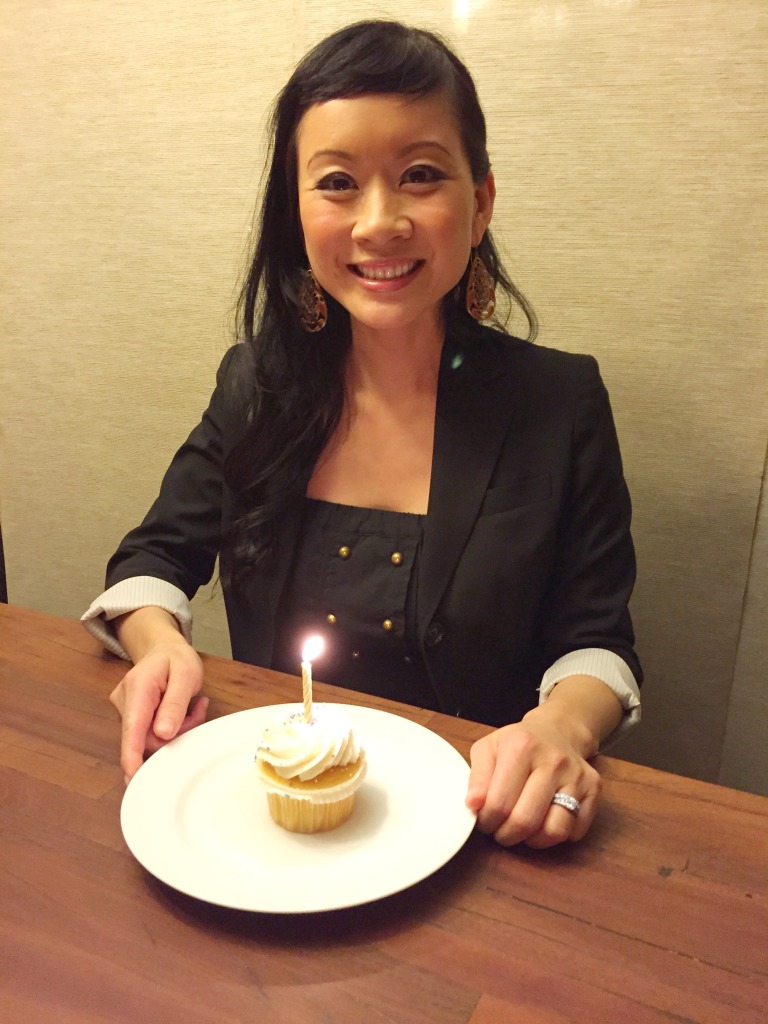 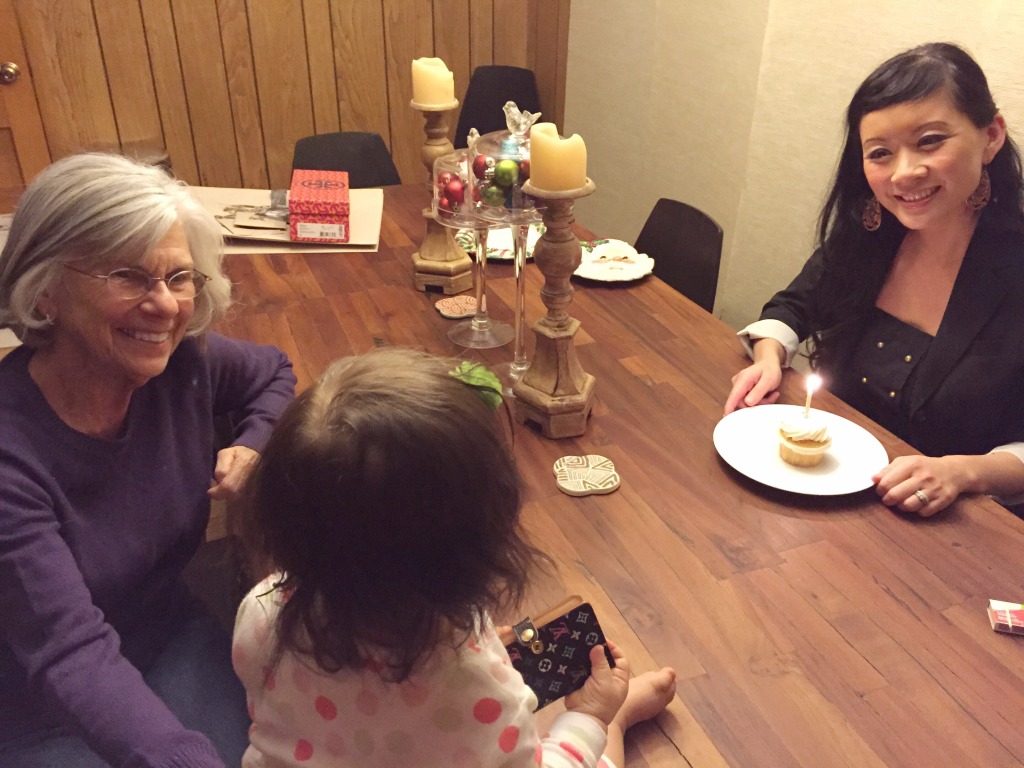 [singing happy birthday to me!] 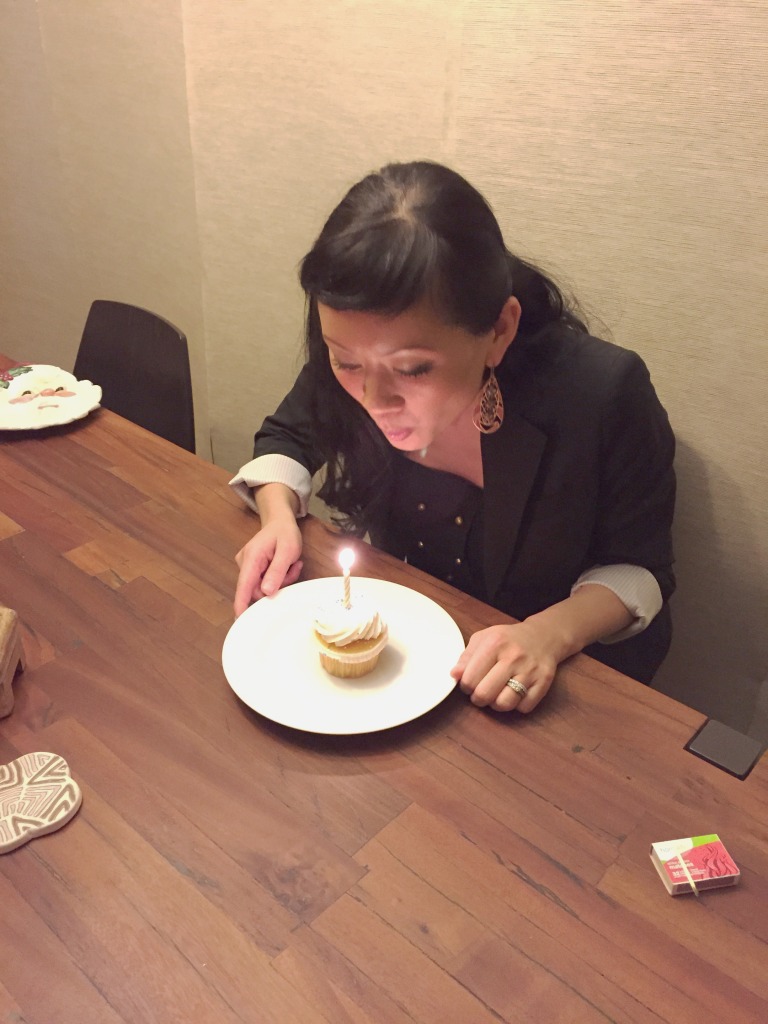 i had the best day with miss olive & hc’s parents. hc always makes my birthday so special! he knows, with it being so close to the holiday craziness, how important it is to celebrate it as my memorable day. he will go out of his way to make it exceptional. he is, honestly, the best birthday present i could ever ask for!